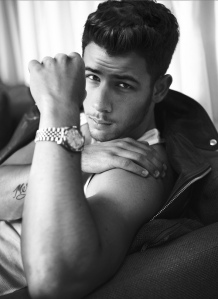 In our search for some Holiday Season tunes, we agreed that one of our favourites from Nick Jonas’ latest album (Deluxe Edition) would be a suitable follow-up post to Oh Land‘s, Nothing Is Over.

Santa Barbara is just what the Holiday season should be all about : chilled – out, calming and peaceful. It’s the type of song that just lets your mind wonder and makes you appreciate and want to be close to the ones you care most about.

Who knew, Nick Jonas had it in him to do a Bon Iver – esque tune?! Oh the magic of music and emotions…always beautiful and amazing.

After listening to his Deluxe self-titled album, we wouldn’t be surprised if Nick gets an unexpected nod for Best New Artist when the Grammy nominations are revealed later this year. #download #onrepeat

My coffees got a bitter taste / I wish that I was in that place / New York City / So far from Santa barabara / And there’s no one, no one like you